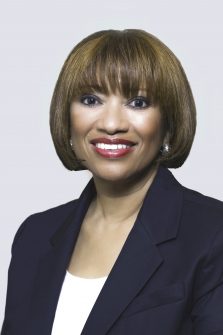 MJLM serves clients in both the public and private sectors in industry areas that include: government, education, energy, entertainment, finance, food service, petrochemicals and telecommunications. In addition to Houston, MJLM has offices in Austin, Texas | Dallas, Texas | Huntsville, Alabama| and Washington, D.C. MJLM is ranked among the three largest African American-owned consulting and business advisory firms in the country and its certified public accounting (CPA) affiliate, McConnell & Jones LLP, was ranked among the 20 largest CPA firms in Houston in 2016.

With more than 30 years of professional experience, Sharon heads the firm’s education practice and is responsible for a national clientele that has included 20 of the nation’s top 100 school districts in 13 states. She also oversees complex, large-scale engagements for federal agencies with nationwide scope. Sharon has been a panelist at national meetings for Council of Great City Schools and the National School Board Association addressing issues on public education.

Her civic involvement includes serving on the board of directors of the Houston Gulf Coast Chapter of American Leadership Forum (board chair for 2016 and 2017), The Ensemble Theatre, Houston Arts Alliance and Unity National Bank.

Sharon has been recognized as one of the “Top 30” Most Influential Women by D-Mars.com, and as a “Woman of Distinction” by the Houston Chapter of the Crohn’s & Colitis Foundation and Houston’s ABC affiliate, KTRK Channel 13. She has also been the recipient of the Building Block Award by Child Builders, Houston’s advocates for mental health in children.

Sharon earned a Bachelor of Arts degree in Communications from Indiana University in Bloomington, Indiana and her M.B.A. in Finance from Clark Atlanta University in Atlanta, Georgia